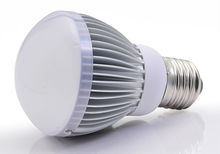 One of the most common questions I receive from homeowners is whether or not they should replace their home’s lighting with LED bulbs.  The answer to this question depends on a few factors, and it only starts with looking at the energy savings.

LED lights definitely save energy over compact fluorescent and incandescent bulbs.  However, if a light is typically turned off then it doesn’t matter what bulbs are installed because no power is being used.  Homeowners tend to turn on lights rarely and then only for a few minutes.  When considering the energy implications of LED lights, you’ll want to target lights that are on for a significant length of time such as a security light, living areas and night lights.  Whether or not the energy savings will save money can be determined with return on investment calculations.

However, even though installing LED lights may not save you much in energy there are other factors to consider.  If you have a fixture that is hard to reach, installing an LED that lasts 30 years could save you some maintenance time in the future.  If you don’t like the blue-ish light typical of CFL bulbs, then you can buy an LED that is tuned to just the perfect light color temperature.  LED lights also put off less heat than incandescent bulbs which can save you money on your cooling costs (but you’ll pay more for heating).

These factors can also apply to commercial buildings.  For instance, a light in a maintenance closet that gets turned on for 5 minutes once a day during cleaning may not save the building much energy with an LED in place.  However, the rest of the lights that are on all day are most likely excellent candidates for retrofitting or replacing.  If maintenance is a concern, LED lights can reduce the need to replace bulbs.  Fixtures can be selected to help keep office employees alert or set the perfect mood for a retail space.  Since they also put off less heat, it’s important to perform an analysis to make sure the building can still be heated and cooled properly after retrofitting the lights.  Additional savings may be possible after removing all those mini-space heaters!

If you are considering LED lights for your commercial building, consider hiring us to complete a Small Business Energy Audit.  We will review your building and provide you with options for saving money.  We’ll also review utility incentive programs to help cover the cost of the improvements. Our goal is to provide an affordable service that a business can use to reduce their energy costs.  We are happy to work with you to find a solution that fits your budget.  If you own or manage a building and are interested in an audit, please contact us today. 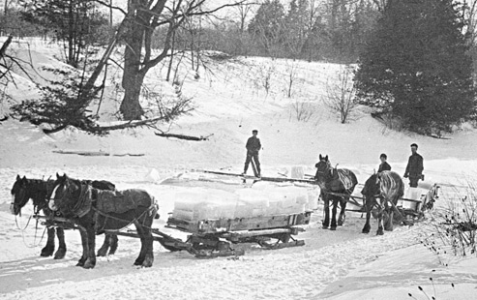 A Ton of Refrigeration

I recently received a question that went like this:  “What does it mean to be a one ton air conditioner?”  The short answer is that it can move 12,000 Btu’s (British Thermal Units) per hour.  This got me thinking about why we refer to refrigeration amounts in tons rather than just the more descriptive energy transfer rate (Btu/hr).  Turns out, there is a neat and practical reason why air conditioning and refrigeration systems are measured in tons.

Before mechanical refrigeration was invented, keeping something cool when it was warm outside was the job of ice.  Ice would be collected during winter, transported to ice houses and stored until it could be sold for use in ice boxes.  The block of purchased ice would be put in the ice box and begin to extract the heat out of the air.  If the ice started out below 32 °F it would first warm up to it’s melting point (32 °F) and then stay at that temperature until it had melted completed.  While the block of ice could extract some heat before it started to melt, the vast majority of the “work” was done while the ice was melting.

With the advent of refrigeration, ice houses started producing their own ice rather than collecting it.  During this transition, it became intuitive to refer to amounts of refrigeration in terms of tons of ice produced within a single day (24 hours). A system that could produce 10 tons of ice every day had a 10 ton system.

Some quick math demonstrates how this simple expression become our modern definition:  The latent heat of ice (the energy it takes to freeze or melt at a constant temperature) is 144 Btu per pound.  If a ton is 2000 lbs, then it takes approximately 288,000 Btu to freeze one ton of ice.  Giving the system a day to create the ice you can convert 288,000 Btu per day to Btu per hour and you get the modern definition of 12,000 Btu/hr.

Large refrigeration systems are often designed by the manufacturer.  However, it may make sense to have an engineer independently design or review system options to make sure that the system is achieving the owner’s goals.  With years of experience designing commercial refrigeration and HVAC systems, Forward Engineers can assist you in your next design, retrofit or remodel project. If you are seeking to work with an engineering firm that is client-centered and strives to provide services that are on time, on budget and exceed expectations, please contact us. We would love to work with you on your next project!

When considering upgrades to a building, one usually thinks first of high tech solutions. While these generally can solve the problem there are important factors such as increased maintenance and high installation cost that need to be considered. Some building issues may be solvable with “old world” solutions which may be much less expensive. For example, be sure to read our article on how to increase the insulation of a window without replacing it. While you are at it, you may want to revisit one of our older articles on keeping cool before refrigeration including strategies for reducing the cooling load on a building.