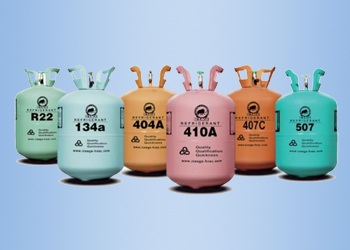 Now that you know a little more about the history and general types of refrigerants (I recommend you read Part 1 if you haven’t already) it’s time to get to the really interesting part, refrigerant nomenclature or naming convention.  To develop the nomenclature for common refrigerants, ASHRAE developed Standard 34, Designation and Safety Classification of Refrigerants.  This standard also provides safety classifications for flammability and toxicity of refrigerants, but this article will concentrate on the naming only.

Refrigerants are named using an “R” (as in Refrigerant) following by a dash and a two to four digit number.  Some refrigerants will also have a letter prefix or suffix that further specifies the chemical makeup.  Refrigerants are classified into 10 groups called series.  These are shown in the table below: 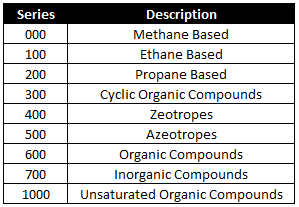 For the first four series (000, 100, 200, 300), the refrigerants are generally a combination of Carbon (C), Hydrogen (H) and Florine (F) with some other elements mixed in here and there.  For these series, a very handy trick called the “Rule of 90” applies.  With the Rule of 90, you simple take the refrigerant number and add 90 to come up with the number of Carbon, Hydrogen and Florine atoms in each molecule.  Here’s an example to demonstrate:

Using this method, we can see that R-22 (CHClF₂) has a single Carbon, one Hydrogen and 2 Florine atoms.  It also has a Chlorine, but that isn’t included in the Rule of 90.

Series 400 and 500 are refrigerant blends (mixtures or two or more pure refrigerants).  This allows engineers to tweak the refrigerant properties and to make the suitable direct replacements for outlawed refrigerants.  These blends are categorized into two blend types, zeotropic (Series 400) and azeotropic (Series 500).  An azeotropic blend behaves much as a pure refrigerant would with the entire substance boiling and condensing at the same temperature. In a zeotropic blend, the various refrigerants in the mixtures would boil or condense at difference temperatures giving the substance what engineer’s call “glide.”  A more in depth look at glide may be a future column, but is beyond the scope of this article.

The Organic Compounds go in series 600.  These are or hydrocarbons and oxygen compounds.  Refrigerant numbers are based on the number of Carbon atoms in each molecule.  In general, the name is derived from adding the number of carbon atoms to 600 and then subtracting 4.

As you can see, refrigerant classification and nomenclature is based heavily in the chemistry of the refrigerant, and this article only scratched the surface of all the rules and tricks that go into the names of refrigerants.  ASHRAE Standard 34 is the authority on all naming rules and has more information about each series if you are looking to continue reading.

At Forward Engineers, we seek to not only be a design and consulting firm but to also educate our clients about engineering technology.  While doing so, we inevitably refresh our own knowledge and sometimes even learn something ourselves.  If you are seeking to work with an engineering firm that is client-centered and strives to provides services that are on time, on budget and exceed expectations, please contact us.  We would love to work with you on your next project! 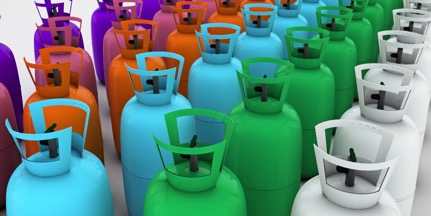 At first it may seem like one of the driest topics around, but I remember finding a presentation on refrigerant history and nomenclature I attended a few years back to be quite interesting.  I started writing this article focusing on just the nomenclature, but it soon became apparent that without some of the history it didn’t make near as much sense.  Therefore, I present our first two part series, Refrigerant History and Nomenclature.

Many accounts will trace refrigerants all the way back to the mid-1700s when scientists were doing early experiments with evaporation and noticing that the temperature would drop significantly.  About 100 years later, the first commercial refrigeration machines were developed in Australia.  Within another 50 years (we’re around 1900 now), vapor-compression cycle refrigeration has spread to most of the industrialized nations.

These early refrigerators used quite a range of refrigerants.  Engineers struggled with finding a substance that behaves the way they needed it to (in terms of when to boil and when to condense) while also not being flammable and/or toxic.  In the 1920s a group of scientists focused on using fluorine as the basis for a new refrigerant that would not be as flammable or toxic as previous substances.  They were successful and developed chlorofluorocarbon (CFC) refrigerants with the most popular being R-12.  In the 1970s, it was determined that the chlorine part of the CFC refrigerant was harming the ozone layer by breaking ozone molecules (O₃) into oxygen molecules (O₂).  The Montreal Protocol, which went into effect in 1989 set out a plan to ban the production CFC refrigerants.  Engineers now needed a substance that wasn’t just non-flammable and non-toxic but also didn’t deplete the ozone layer.

To replace CFC’s, the industry came up with hydrochlorofluorocarbon (HCFC) refrigerants.  R-22 is one of the most well recognized HCFC refrigerants and sometimes referred to by its brand name, “Freon.”  These too, had environmental concerns and were ultimately replaced by hydrofluorocarbon (HFC) refrigerants such at R-410a, sometimes called “Puron.”  Unfortunately, the fluorine portion of HCFC and HFC refrigerants is now considered to contribute to Global Climate Change and is to be phased out by 2030.  Engineers are now looking for a substitute that behaves the way they need it to, isn’t toxic or flammable, doesn’t deplete the ozone layer and doesn’t contribute to climate change.  Some of the most promising refrigerants for this are natural refrigerants such as carbon dioxide, ammonia and hydrocarbons.  Many of the safety concerns that originally caused us to stop using these refrigerants can now be reduced using modern technology.

Be sure to check back next week for the dramatic conclusion in this two part series where we’ll take a look at why refrigerants have funny names like R-22 or R-134a and what the names mean.

The 115th Congress will begin today at noon.  Based on my conversations with our elected representatives, once the new Congress is in session the extension of the 179d tax deduction will be considered.  To recap, Section 179d is a tax deduction for energy efficient buildings, but it expired on December 31, 2016.  Let’s take a look at some of the bills that have currently been proposed in the House and what affect they would have on 179d.

H.R. 6376 seeks to allow more types of buildings and owners to take the deduction.  Currently, government-owned buildings can allow the design team to take the deduction but a private non-profit could not.  This bill allows the deduction to be assigned to the design team for any “property owned by a Federal, State, local, or Indian tribal government, or a political subdivision thereof, or by an organization that is described in section 501(c)(3) and exempt from tax under section 501(a).”  Additionally, only multifamily buildings below four stories were not allowed to qualify.  This bill adds multifamily buildings (with an exception for qualified low-income buildings) to the list of properties that can be qualified.    H.R. 6376 was introduced into the House Ways and Means Committee on November 17, 2016 by Rep. David Reichert (R-WA) and has three co-sponsors with bi-partisan support.

Both of these efforts are a good move for 179d.  My preference is for a permanent extension, but I’ll obviously take the two year extension over the one year extension if given a choice.  The expansion to non-profits and multifamily buildings will open up opportunities for additional building savings and be a further incentive for design teams to design higher efficient buildings.  We’ll keep our eye on further developments in the extension of 179d and publish any updates here at our website.  If you have any questions about 179d or have a building you think may be a good fit for the deduction, please don’t hesitate to contact us.